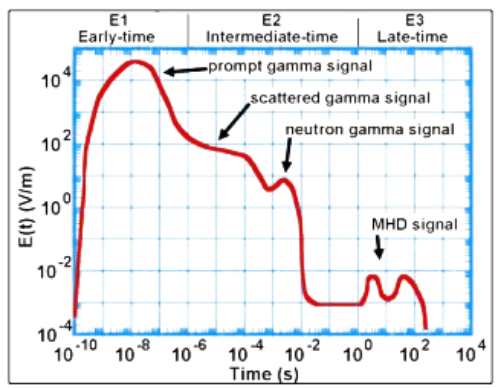 An electromagnetic pulse can be generated by detonating a nuclear weapon in the upper atmosphere. Often referred to as HEMP, the event simultaneously generates multiple waveforms that vary in timing, duration, power and wavelength. The waveforms are be broken into three phases, E1, E2 and E3. The first phase, E1 is characterized by a high amplitude, extremely short duration signal capable of overwhelming and destroying semiconductors embedded in electronics. The leaner, faster, high-capacity micro-circuits within modern devices are especially vulnerable. The E2 phase consists of electromagnetic waves similar in intensity and duration to waves generated by lightning strikes. Although E2 waves can be destructive, our society appears to be protected against E2 due to commonly installed lightning suppression systems. Lastly, E3 signals are characterized as being similar to a GMD, with lower amplitudes and much longer durations than the E1 and E2 elements. E3 waves tend to impact infrastructure connected to long conductors such as power lines, metal pipelines, or even railroads.

Solar storms are naturally occurring space weather events that produce coronal mass ejections (CME) which can travel through space toward Earth. When charged particles from CMEs hit Earth’s magnetosphere and ionosphere, they create a geomagnetic disturbance (GMD) that affects satellites, power grids, communications, navigation, and more (as shown in Figure 2.1). When CME-induced GMDs impact the power grid, they can overheat high-voltage transformers to the point of irreversible damage. As critical components of power transmission, damaged transformers can lead to widespread power outages. Although space weather events occur often, the severity is generally low and there is little to no impact on our daily lives, particularly in communities with close proximity to the equator. However, researchers estimate that the chances of a large-scale GMD event are as high as 12% every decade.

EMI can be caused by natural or human-made sources. Using high quality electronics, electrical shielding, and modern error correction can reduce the impact of EMI.

A common example of EMI is when a cellphone is placed near powered audio equipment or speakers, and it causes a noise or series of beeps to be heard.

EMI occurs because of the close relationship between electricity and magnetism. All electrical flow produces a small magnetic field. Conversely, a moving magnetic field produces an electrical current. These principals allow electric motors and generators to work. Additionally, all electrical conductors can operate as radio antennas. High powered electrical and radio sources can produce unwanted effects in devices far away. As electronics become smaller, faster, more tightly packed and more sensitive, they become more susceptible to these effects, causing EMI.

The sources of EMI can be broadly split into two categories: naturally occurring and human-made.

There are some sources in the natural world that can produce powerful enough electric fields to affect electronic devices. Lightning can produce strong electrostatic discharges and magnetic pulses. Solar storms and solar flares emit highly charged particles that can cause problems with satellite and terrestrial communications. Cosmic radiation has been known to cause bitflips in electronics.

Human-made EMI can come from many places. High-power radio and electrical sources can cause unwanted EMI. Malfunctioning or improperly designed consumer devices can cause EMI in other devices. Using an electromagnetic pulse to intentionally induce EMI faults in victim devices is also a possible offensive action.

In EMI there is a source, a path and a receptor (or victim). There are several types of paths, or methods of transmission of EMI from the source to the receptor.

Radiated EMI happens when a high-power transmitter or electrical device produces a radio frequency that is picked up and causes unwanted effects in another device. If there is EMI and the source and receptor are far apart, then it is likely radiated EMI. Some examples of this would be a broken kitchen microwave causing a computer to reboot or old wireless telephones causing Wi-Fi to drop.

Radiated EMI can be subdivided into narrowband and broadband interference.

Wireless telephones causing Wi-Fi to drop is an example of radiated electromagnetic interference.

Conducted EMI happens when there is a physical electrical path from the source to the receptor. This is often along power transmission lines. Some sources may be a large motor or power supply. An example of conducted EMI is the turning on of a treadmill or clothes dryer causing a computer on the same electrical mains circuit to reboot.

Coupled EMI happens when the source and receptor are close together, but not electrically connected. Coupled EMI can be transmitted through induction or capacitance.

How to prevent EMI?

Medical devices may have legal requirements for EMI shielding and testing. It is also common for hospitals to require that cell phones be switched off to prevent them from causing EMI in sensitive equipment.

Consideration of EMI is important when designing electronics and circuit boards. This is especially true in modern high-speed devices. Board designers must account for component location and routing. They may also include metal shielding cans or conductive tape to block EMI from affecting sensitive components.

In highly sensitive situations, a Faraday cage may be used to shield a device or room from outside EMI. Radio telescopes are often constructed in isolated areas away from population centers to reduce EMI